This study was just published that documented changes in plasma and urine levels of NAD+ and its metabolites during and after 750 mg NAD+ intravenous (IV) infusion.

Increased urinary excretion of MeNam and NAD+ were detected at 6 h, however, no significant rise in urinary NAM was observed.

This study revealed for the first time that: (i) at an infusion rate of 3 μmol/min

The most direct method of increasing NAD+ levels is through intravenous (IV) administration.

Surprisingly, while the oral administration of NAD+ precursors such as nicotinamide riboside (NR) or nicotinamide mononucleotide (NMN) are being enthusiastically investigated for their impact on NAD+ levels, this study presents for the first time the changes in concentrations of NAD+ and its metabolites during an IV infusion of NAD+ in a cohort of healthy male participants.

Eleven male participants aged 30–55 years were randomized to either the Test (n = 8) or Control (n = 3) group. Participants in the Test group were intravenously administered 750 mg NAD+ in normal saline over a 6 h period.

Safety
No adverse events were observed during the 6 h infusion with either placebo (saline) or test (NAD+) cohorts.

Results
A significant decrease in activity (1.3, 57, 3.6 units/L) for the liver function enzymes GGT, LD and AST, respectively was observed at 8 h after initiation of the NAD+ infusion (Table 1). No significant change in activity for any liver function marker was apparent at 8 h in the placebo (saline) treated samples, however low sample number may reduce discrimination sensitivity. A significant increase of 2.75 μmoles/L in plasma bilirubin was also observed. However, none of the changes were considered clinically significant. 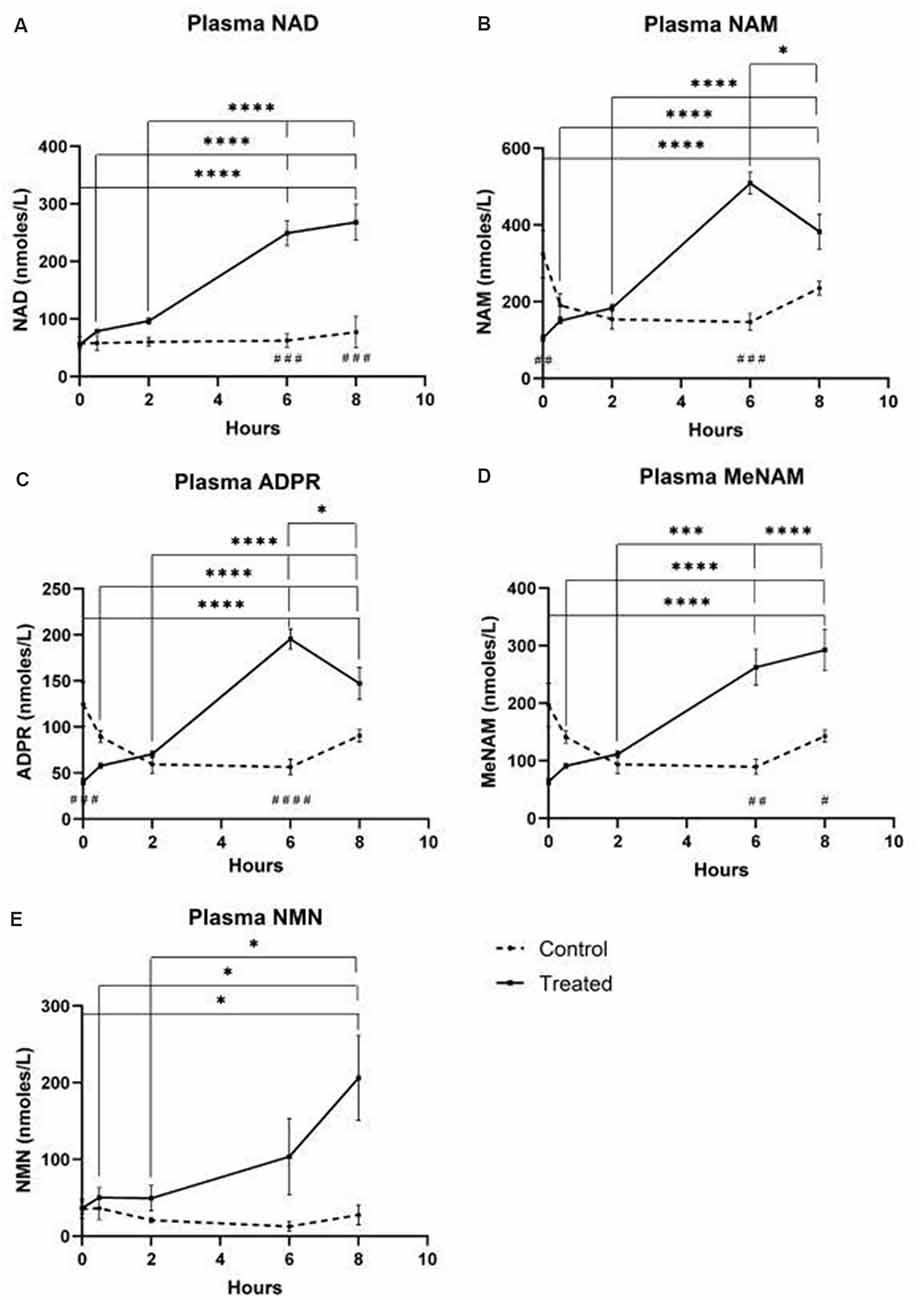 Importantly infusion of NAD+ did not produce any observable adverse events in the test cohort but rather reduced plasma activities of enzymes indicative of hepatic stress such as the intrahepatic LD and AST and the post-hepatic (bile duct) enzyme GGT suggesting that the integrity of both intra hepatic and post-hepatic tissue was enhanced even within the relatively short 8 h time frame.

Unexpectedly however in NAD+ infused participants, plasma NAD+ levels failed to rise until after the 2 h time point reaching a maximum of ~400% above baseline for NAD+ and metabolites NAM, meNAM and ADPR (398%, 409%, 393%, respectively) only at the 6 h time point (Figures 1A–E). This was internally consistent with the peak of urinary excretion for both NAD+ and meNAM also occurring at 6 h before rapidly decreasing after the end of the infusion.

The parallel rise of plasma NAM and ADPR (correlation coefficient of 1.000, p < 0.001, data not shown) strongly suggests that at least by 6 h a major fate of NAD+ is metabolism through cleavage of the glycosidic ADPribose–nicotinamide linkage to NAM and ADPR, by-products symptomatic of NAD glycohydrolase (e.g., CD38) activity. This is consistent with evidence by others where CD38, in particular, has been shown to have a primary role in controlling extracellular NAD+ levels (Wei et al., 2014).

While significant capacity exists for the rapid degradation of the exogenously supplied IV NAD+ into constituent metabolites, it is also worth noting that uptake of extracellular NAD+ may also be occurring.

As NAD+, has an overall negative charge it is unable to cross cellular membranes passively and therefore must be actively transported across the membrane. That this occurs has been shown by a number of researchers who have reported that exogenous NAD+ applied to a variety of human cell types does indeed result in a significant elevation of intracellular NAD+

While the mechanism(s) involved are not yet fully characterized, Alano et al. (2010) reported that exogenous NAD+ could enter neurons through P2X7 gated channels and others have consistently observed the transport of NAD+ across membranes by connexin 43 (CX43) hemichannels, even at concentrations as low as 250 pM (Billington et al., 2008). As connexins have a wide distribution in human tissue and CX43 appears to be the most ubiquitous connexin in many cell types the potential for rapid uptake of NAD+ cannot be discounted.

Thus cellular uptake and/or metabolism of NAD+ and metabolites NAM and ADPR and secondary metabolites meNAM and NMN appeared to proceed at pace with the 3 μmoles/min NAD+ infusion for at least the first 2 h.

Either NAD+ and/or the primary metabolites tested are being efficiently sequestered during this first 2 hr period or secondary metabolites are also being formed.

In support of this hypothesis, an increase in blood adenosine levels has been recognized by others as a consequence of extracellular NAD+ infusion.

However, the rise in plasma NMN after 2 h also suggests that exogenous NAD+ is likely acted on by extracellular NAD+ pyrophosphatases, elevating plasma NMN and releasing AMP as an additional metabolite.

In summary, this study revealed for the first time that: (a) at a flow rate of 3 μmole/min all exogenously infused NAD+ was rapidly and completely removed from the plasma for at least the first 2 h; (b) the increase in metabolic bi-products analyzed is consistent with NAD+ glycohydrolases and NAD+ pyrophosphatase activity; and (c) the urinary excretion products arising from NAD+ infusion include native NAD+ and meNAM but not NAM.

Thanks for subscribing! Please check your email for further instructions.